skip to main | skip to sidebar

Trip to the Mexican Border 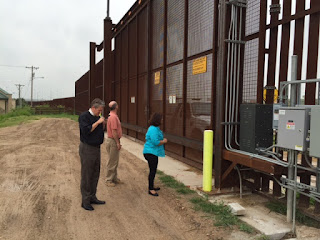 I flew into the Rio Grande Valley of Texas late on Sunday evening, June 21, 2015 to join about 15 other Lutheran Immigration and Refugee Service representatives. LIRS is our national organization that supports refugees, immigrants, and migrants. Lutheran Services Carolinas is the LIRS affiliate that resettles refugees in the Carolinas.

We spent the first day in and around Hidalgo, Texas on the Mexican border, then the second day in Houston. The border area was a different and eye-opening experience. I have never seen so many police. The U.S. Border Patrol was ever present along the border, supplemented by even more Texas law enforcement. Texas has taken a hard stance against undocumented migrants so has bulked up law enforcement. As always, there are two sides to the argument. Law enforcement is upholding the law. Many of the undocumented have been here for years or even generations. Many of them have children born in the U.S., who are therefore citizens. They obviously fear the law enforcement presence, which could sweep up a single mother on her way home from work. A broken tail light can easily tear a family apart.

We got to see this firsthand. You could rarely look in either direction without seeing a police car. Our unmarked, rented, tinted-window bus was pulled over. Members of our party began to search for their identification in preparation for the search of our bus. The Texas State Patrolman seemed surprised when he climbed up the steps to find a dozen white, middle aged tourists staring at him with apprehension. We were not what he was looking for. He smiled, said hello, and didn’t even check our ID. Afterward, we walked right up to the giant border fence and looked over the Rio Grande River into Reynosa, Mexico.

We toured the colonias (colonies) along the border where thousands of people, documented and undocumented, live in houses they do not own and on land they do not own. But they’ve been there so long that they buy and sell these houses (many are shacks) without a title, deed, bank, or lawyer. They’ve created their own economy. We were able to sit down with two mothers and their children to hear of life and fear and hope in the colonias. I asked one third grader what he liked best in school and what he wanted to be when he grows up: mathematics and fireman! His first grade sister: writing and school teacher! Hope springs eternal!

We toured a small ministry run by the sainted Sisters of Divine Providence where we met a dozen Somali refugees. Somalis? Were they lost? Was I lost?
People from Somalia are immediately granted asylum in the United States, if they can get here. The problem is there is no way to get here. But hope springs eternal. These Somalis have found a way. They ride and walk from Somalia to usually South Africa, are smuggled to Brazil on the next continent, make their way west across the Amazon, thru Peru, Ecuador, Colombia, Central America, and through Mexico to the U.S. border. If they get here, the prize is asylum. What would make someone take that trip, and many don’t survive? Their stories are haunting: my father was beaten, my brother was killed, I was held prisoner, I escaped….

The border is also teeming with Cubans. A relic of the Cold War, any Cuban who makes it to the U.S. receives asylum. For many years, Castro wouldn’t let anyone leave. Now, Cuba is willing to give its citizens exit visas. Enterprising Cubans travel to Mexico, travel to the border, and present themselves to the U.S. Border Patrol and ask for asylum. Partly as a result, Houston has the largest population of Cubans in America only behind Miami! When Cuba and the U.S. normalize relations that path will stop, so Cubans are coming as fast as they can get here.

In Houston on Tuesday we visited with Refugee Services of Texas, our sister LIRS affiliate. They do great work across Texas! We met Chalak, a refugee from Iraq who is now a staff member. Chalak was an interpreter for our U.S . troops in Bagdad. He said his car was bombed. Thankfully, he said, he was not in the car. Sadly, two of his best friends were. He was granted refugee status and removed to the U.S. before he too was killed. Once again, America is doing the right thing by supporting a refugee who supported our troops.

While in Houston I learned that Houston is now the 4th largest city in the United States! When did that happen?! We heard from an immigration attorney who has been a policy advisor to two Presidents of the United States. He shared the latest on the politics of immigration reform and the chances of immigration reform in the future. And we heard from Rice University professor Dr. Stephen Klineberg about the demographics of Houston and its rich diversity, and demographic trends in America. The major takeaway for me is that we desperately need immigration reform, because the system is so broken, and we need the immigrants to fuel nationwide entrepreneurship and economic growth. Sealing the border to all immigrants seals our fate as a post modern, declining nation.

I fussed and fumed all the way to the airport Sunday afternoon, not wanting to leave home and not wanting to be gone for two work days. But as always, I learned. I learned more about: LIRS and other related ministries, national policy issues, other cultures, and I learned how good we’ve got it and to be thankful for that.

Lutheran Services Carolinas and the Rowan County Chamber of Commerce

I have been asked a couple of times recently why Lutheran Services Carolinas and I are involved in the Rowan County Chamber of Commerce. We’ve been very active and I serve on the Chamber Board, but I was sort of stunned by the question. It’s sort of like someone asking me why I breathe air. But I guess I should develop a good answer.

Lutheran Services Carolinas and I are members of this community. Like any other membership, we should be all in or not be involved. The Chamber is a business advocacy organization, promoting more and better business across the entire county. LSC is a $115 million ministry/nonprofit/business headquartered in Rowan County, and we employ almost 350 people just right here in Rowan. A good, strong community is important to us and we are important to our community. I can’t imagine living and working in Rowan County and not being a part of the very fabric of the community.

Being part of the community is reward and reason enough to be a member, but we do get many other benefits: networking, education, advocacy, and advertising. Leadership Rowan is reason enough alone. The professional development and relationships are worth the reasonable cost. The benefits make Lutheran Services Carolinas a stronger, more successful organization aiming for a bright future. The future would be much less bright without the partnership of our Chamber’s over 850 fellow members.

Next time someone asks me why the Chamber, I’ll be ready!